My 3 and 5 year olds are at the age where they love telling on each other. Some days it seems no matter what one of them is doing the other one comes running to us screaming about it. Sometimes we need to intervene, often it’s benign stuff they can handle on their own. My husband, in an effort of getting them to think about why they’re telling us, has started asking this question: Are you telling me because you want to get them in trouble or because they need help?

Unfortunately, I don’t just see this behavior in kids. Early last week, a friend of mine ran into something similar in a group she was a part of. She asked for prayer and advice regarding a situation she was having and one of the other members, for reasons not disclosed because it was done anonymously, went and told the pastoral staff of their church, who ended up contacting my friend. She has since left the prayer group because her trust was violated and it’s ruined that friendship with the tattler.

Another incarnation of the same sort of problem is one I have encountered far more often. You’re praying with a group and someone says this, “Father God, we lift up our sister Mary Catherine to you, as she just caught her husband in bed with another woman after 25 years of marriage. Have mercy on her devastated heart and protect the hearts of their children, as they have already been put into therapy after Michael upon hearing this punched his father in the face on their front lawn. Help us as a community of believers remember to lift them up in times of trouble. Amen.”

By now, I’m sure you’re cringing and saying, “This is why I don’t ask people to pray for me.” But the problem revealed in both of these examples is one found in all of us: We are often tempted to be judgmental instead of compassionate. We want those who behave badly to be punished, we want those who make us uncomfortable to be silenced and we want to gossip about the details of each others lives because we want validation of our disapproval.

Now I am not saying do not hold accountable, do not hold to a high standard, and to each their own because it’s all good because that is not compassion, but apathy, and not caring at all about someone’s condition is just as fruitless as judging them.

Compassion means investing in someone else’s story. It is beyond seeing when someone deserves judgment and not giving it to them. Compassion is actively loving someone.

Jesus explains compassion to an Expert of the Law by telling the parable of the Good Samaritan. The set up is the Expert asks Jesus what he must do to inherit eternal life. Jesus asks him what the law says, and the man replies: “Love the Lord your God with all your heart and with all your soul and with all your strength and with all your mind and, ‘Love your neighbor as yourself.” Jesus gives him the thumbs up and says, “Bingo! Do that and you will live.” Then, just to be smarmy, the Expert asks, “And who is my neighbor?” Jesus replies by telling a story about a man who had been badly beaten by robbers and had a Priest and Levite cross the street to avoid him. But when a Samaritan man saw him, he took pity on him, tended his wounds, took him to an inn and paid for his care.

Jesus asked the Expert, “Which of these three do you think was a neighbor to the man who fell into the hands of robbers?” The Expert of the Law replied, “The one who had mercy on him.” Jesus told him, “Go and do likewise.” (John 10:25-37)

The word mercy here in Greek is ἔλεος (eleos) which means “kindness or good will towards the miserable and the afflicted, joined with a desire to help them.” (blueletterbible.org)

Its worth noting here that it was the Expert who used this word, and did so correctly. We know exactly who our neighbor is and how we should treat them but our natural inclination is not to be kind and not want to help the miserable and afflicted. It comes easy to me to be like the Priest and the Levite while scrolling through social media, silently judging people while not getting involved. Or in some instances, I am like the Expert of the Law, actively looking for loopholes so that I am justified in being cruel. But Jesus example of the Samaritan, who was likely being despised (at least in idea) by the man he was helping, calls me out and says surely, in the middle of whatever generally accepting group I am a part of can ask how I would want to be regarded, and if I want to get this person in trouble, or if I want to help?

When Jesus was “moved with compassion” he healed the sick, raised the dead, wept over his enemies and forgave even the greatest sinners. His compassion more than changed people’s behaviors and circumstances, it changed the trajectory of their lives.

Go and do likewise. 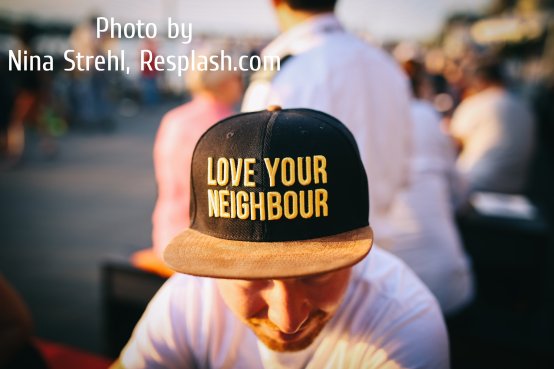